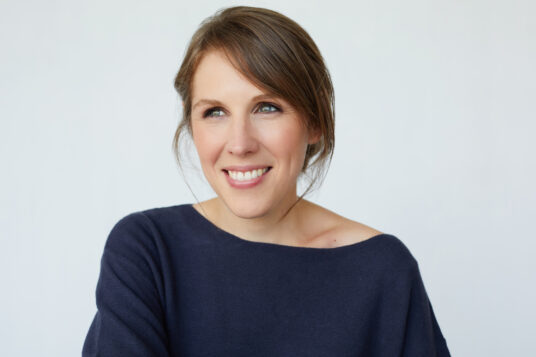 Marie-Eve Huot belongs to the new generation of artists committed body and soul to theatre for young audiences. In 2007, she co-founded Théâtre Ébouriffé, with which she produced the shows Cabaret au bazar, Un château sur le dos, Nœuds papillon, and Des pieds et des mains. As an actor, she has played in many productions, including Wajdi Mouawad’s Assoiffés. Her direction of Suzanne Lebeau’s Une lune entre deux maisons earned the Prix LOJIQ/RIDEAU Francophonie (2013). Her first play, Nœuds papillon, has been published by Lansman Éditeur and produced in France, Poland, and Mexico. In 2020, she became Suzanne Lebeau’s mentee in the Governor General’s Performing Arts Award Mentorship Program.

In 2021, Marie-Eve Huot became artistic director of Le Carrousel, after having been associated with the company for 13 years. The same year, she directed the show Antigone sous le soleil de midi, which Suzanne Lebeau wrote for her. Marie-Eve is strongly committed to and involved in the theatre community and sits on the boards of directors of numerous organizations. Among other things, she was director of Théâtres Unis Enfance Jeunesse for six years and sat on the executive committee of the Chantier féministe steered by Théâtre Espace Go.